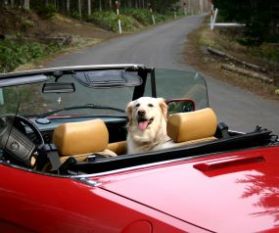 For me, one of the most charming movies ever is the 2007 release “The Bucket List,” starring two of my favorite actors, Morgan Freeman and Jack Nicholson. In the film, two dying men team up to create their bucket lists – lists of adventures they hope to complete before they “kick the bucket.”

Last summer, a young boy named Cole created a bucket list, or as he called it, a “lick it list,” for his dying service dog, Bingo. The list went viral and the dog received treats from all over the world, which allowed him to tick off one item on his bucket list.

Since the Cole and Bingo story hit the news, several of my pet families have spent their pet’s last days treating them to adventures. I thought my readers would enjoy these stories and the wonderful memories they must have created for the dogs and their families.

Always one of our favorites, Dottie the American Bulldog got a cross-country trip and her own backyard as part of her bucket list. Dottie loved the beach, and in the video clip below, you can see how much she enjoys the sand and surf despite the fact that her lymphoma is out of remission for the third time. She spent her last New York days at the beach while her family organized their westward move. Dottie’s cat flew economy class to California, but Dottie went in style on a cross-country road trip with her best friend, Henry. Dottie emailed me from exotic places along the way like Nebraska and Colorado! At the end of the long trip was a surprise – a new house with a backyard – something most New York City dogs can only imagine, but Dottie got to cross off her list.

Safety in the car is as important for dogs as it is for humans, and I recommend dogs ride with a restraint device and the windows rolled up. Although dogs love to ride with the wind in their muzzles, it is just not a safe way to travel. The bucket list of one dog, Rufus, included a ride in the family’s red convertible. Not the best vehicle for dog safety, but on one of his last days, the boys played hooky from school and took their beloved dog on the ride of his life with the top down and the wind in his face.

A can of Alpo

In her 2011 book, I Remember Nothing, Nora Ephron wrote two lists, one of which was a bucket list of sorts. Her “What I Will Miss” list includes everyday joys we take for granted: favorite foods, a walk in the park, and our own comfy bed.

I suspect simple things might be on your dog’s bucket list too. Louie, the standard poodle, got one of those simple things in life: a can of Alpo dog food. Louie’s family felt the enlargement of the lymph nodes, indicating the return of his cancer. Shocked by how quickly the lymph nodes increased in size and wanting to give his dog something he had never experienced before, his owner rushed to the store for a can of Alpo dog food. Louie enthusiastically responded by gulping down the entire can in one sitting. Simple and satisfying.

What would be on your dog’s bucket list? Write back and let us know.

This entry was posted on Monday, December 10th, 2012 at 9:02 am and is filed under dogs, pet health, pets, veterinarian. You can follow any responses to this entry through the RSS 2.0 feed. You can leave a response, or trackback from your own site.