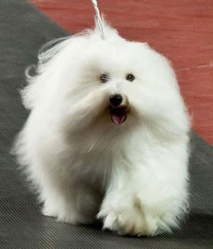 This coming weekend begins the multi-day canine spectacular known as the Westminster Kennel Club (WKC) Dog Show. The annual event is the second oldest continuous sporting event in the United States, ranking number two to the Kentucky Derby, one year its senior. Dog lovers can spend Valentine’s Day watching the second annual Master’s Agility Competition at Westminster or meeting over 100 different purebred dogs at the AKC Meet the Breeds show. The WKC Show takes place Monday and Tuesday, February 16 and 17. Daytime events are at Piers 92 and 94 (711 12th Avenue at 55th Street). The evening events, Best of Group and Best in Show, can be seen at Madison Square Garden where the Show has been held for 139 years.

Every Year Beau-tee-ful Dogs!
Nothing new here. The WKC Show will feature nearly 3,000 gorgeous dogs, at least one dog representing each of the American Kennel Club’s (AKC) 184 registered breeds. Leading the pack in terms of numbers are America’s family dogs, the Golden Retriever with 58 entries and Labrador Retrievers with 56. The breed represented by the fewest number of entrants is the Norwegian Lundehund with one ‘lone wolf’ entrant. These truly are rare dogs; I checked The Animal Medical Center’s (AMC) 57,638 dog registrations and found only three Norwegian Lundehunds. This Norse breed features six toes on each foot and a neck so flexible, the top of their head can touch their back, both advantageous adaptations for hunting puffins on the icy slopes of Norway. Like most Artic breeds, they have a thick coat to help them withstand frigid temperatures.

New Breeds at the Show
The list of 184 AKC breeds includes two breeds newly recognized by the American Kennel Club that will be seen at Westminster for the first time: the Coton de Tulear in the Non-Sporting Group and the Wirehaired Vizsla in the Sporting Group. The veterinarians at The AMC know the Coton well as they are popular pets in NYC and we have 145 of them as patients. Since the Wirehaired Vizsla was not imported to the United States until the 1970s, they are not well known. Seeing the Wirehaired Vizslas at the WKC Show will be a special treat since none of these Hungarian hunting dogs have been seen as patients at The AMC.

As Always, The AMC Will Be There
The AMC’s veterinarians will be in attendance for emergency care at both the Piers and the Garden from Saturday until the 2015 Best in Show is named. The AMC will also have an information booth at Meet the Breeds on Saturday (Booth #131 Pier 92) and at the WKC Show on Monday and Tuesday (#44 Pier 94). Please stop by and say hello.