Do We Really Have to Worry About Ebola in Dogs? 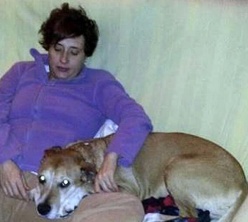 Excalibur with his mom

With the first death in the United States from Ebola virus last week and the first known transmissions of Ebola virus outside of Africa occurring in Spain and here at home in Texas, Americans are rightfully nervous about this deadly virus spreading. For those of us who love pets, the euthanasia of Excalibur, a Spanish dog exposed to Ebola virus by his infected owner, was another heartbreaking chapter in the Ebola saga. Not only was this healthcare worker infected with a lethal virus, her beloved dog is dead too. So far the news out of Dallas, where the newest American Ebola victim has exposed her dog to Ebola virus, is that this dog will live.

How did we get to this point?
In West Africa, the Ebola virus has been thought to spread as a result of handling bush meat – wild animals hunted for food – and through contact with infected bats. West African dogs are not fed, but scavenge for food in and around their villages. This feeding practice theoretically puts them at risk for exposure to Ebola virus though consumption of scavenged bush meat. The possibility of Ebola virus exposure in dogs consuming bush meat prompted scientists to study the blood of dogs in regions of West Africa affected by the 2001-02 Ebola outbreak. They also studied dogs in West African areas spared by the 2001-02 Ebola outbreak, as well as some dogs in France. The results of that study suggests dogs in West Africa living in villages affected by Ebola virus have been exposed to the virus, but do not seem to show clinical signs of illness. A couple of French dogs also tested positive for exposure, which was perplexing since exposure of these dogs to Ebola virus seems very unlikely. A few dogs were tested for the presence of the virus, but no virus was identified.

How much evidence is there for Ebola in dogs?
In response to questions at a press conference on Tuesday [October 7, 2014], before Excalibur was euthanized, CDC Director Tom Frieden said, “There is one article in the medical literature that discusses the presence of antibodies to Ebola in dogs. Whether that was an accurate test and whether that was relevant we do not know. We have not identified this as a means of transmission,” Frieden added, “although scientists do know that Ebola can infect mammals and the virus can spread that way.”

Was Excalibur’s euthanasia justified?
While I can understand Spanish public health officials’ goal of preventing any additional cases of Ebola virus infection in humans by euthanizing Excalibur, the scientist in me sees a lost opportunity. If public health officials could have found a way to quarantine Excalibur and monitor his health, much could have been learned. The currently available studies tested the blood of dogs for antibodies against the Ebola virus, but the actual virus has not been identified. The presence of antibodies against any infectious agent, Ebola virus included, tells us the patient was exposed to that organism. It does not tell us if the animal carries the virus, if the animal will get sick and, most importantly, if the animal can transmit the virus to another animal or human. Much is lacking in research about dogs and Ebola virus, especially identifying the actual virus in the bloodstream and identifying how or if dogs shed the virus. Fortunately, scientific minds have prevailed in Dallas and we must all hope this dog will provide vital information about Ebola virus.

Now what?
Keep in mind exposure of your favorite Fido or Fifi to Ebola virus is highly unlikely since you serve up nutritious and safe dog food and not bush meat. We also are not in the midst of an Ebola epidemic in the United States and the probability of your dog being exposed to Ebola virus is currently nil. But the sad story of Excalibur and his owner are a stark reminder that many diseases can pass readily between pets and their people; among them flu, ringworm and Salmonella.

Whenever you are sick, quarantine yourself from the rest of your family, pets included, to prevent transmission of your illness to others. Cover your coughs and sneezes and wash your hands frequently to protect all other members of your family. If you are worried about your pet’s health, seek the advice of your best pet health resource – your family veterinarian.

This entry was posted on Wednesday, October 15th, 2014 at 11:23 am and is filed under dogs, pet health, pets, veterinarian. You can follow any responses to this entry through the RSS 2.0 feed. You can leave a response, or trackback from your own site.