Gastropexy: Preventing Bloat in Your Dog 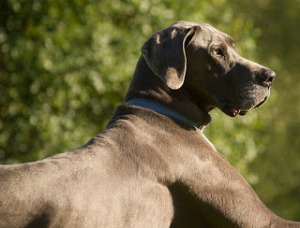 Every dog owner wants their pet to be as healthy as possible. That’s why veterinarians recommend puppies have a series of shots and dogs receive an annual physical examination. We also prescribe preventive medications like those to protect from heartworms and, as dogs age, more frequent examinations to address geriatric concerns like arthritis and thyroid disease. But in my mind there is more to consider, and in specific cases do, for our favorite furry friends…for example gastropexy.

A different type of stomach stapling
Literally translated from medical terminology, gastropexy describes the surgical attachment of the stomach to the abdominal wall. This is not a weight loss surgery, but a surgery designed to prevent the stomach from slipping out of place and twisting on itself. For families with large breed, deep-chested dogs, this surgery alleviates the worry about a twisted stomach, also called gastric dilatation and volvulus (GDV) or bloat.

Bloat is a life threatening condition where the stomach becomes distended with gas or food and then twists around itself. The twist blocks blood flow to the stomach and sets off a cascade of events leading to shock and, if not caught early, death. Correction requires emergency surgery to untwist the stomach and then surgeons typically perform a gastropexy to keep the stomach in place.

An ounce of prevention
Research has shown giant and large breed dogs, especially those with deep chests and narrow waists, are at risk for GDV. If a dog bloats and requires surgery to correct the problem, veterinarians recommend a gastropexy to prevent a second occurrence of GDV. Since we know certain breeds are at risk for GDV, I discuss a prophylactic gastropexy with families who have a large or giant breed dog. Prophylactic gastropexy has been shown to decrease mortality from GDV two-fold in Rottweilers and 29-fold in Great Danes. The surgery can easily be combined with spaying or neutering and can also be done non-invasively using laparoscopic techniques.

What dog owners can do
If you have a giant or large breed dog, discuss gastropexy with your veterinarian. If your dog has a distended abdomen, unproductive vomiting or retching, go to the nearest animal ER immediately since these signs are typical for dogs with bloat.

This entry was posted on Wednesday, September 18th, 2013 at 2:07 pm and is filed under dogs, pet health, pets, veterinarian. You can follow any responses to this entry through the RSS 2.0 feed. You can leave a response, or trackback from your own site.

2 Responses to Gastropexy: Preventing Bloat in Your Dog