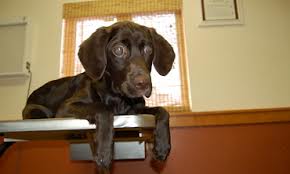 I suspect many of my readers think practical DNA testing is an oxymoron. For many, DNA testing conjures up visions of sleek, shiny, sterile laboratories for solving crimes, but not day to day management of sick dogs and cats. DNA testing can also be fun when it is used to determine the ancestry of your mixed breed dog. This week I used DNA testing in my clinical patients to help better manage their health.

Coco is one of my patients without cancer. She came in for a routine examination. Because she is a Cavalier King Charles Spaniel and screening blood tests showed her platelet count was low, she needed DNA testing. Platelets are blood clotting cells and patients with a low platelet count may have severe hemorrhage. Coco wasn’t sick in any way, but because certain dogs within the Cavalier breed have a genetic disorder causing a low platelet count, we tested her DNA for the known mutation.

Gus has a different genetic problem. He is a flashy, blue merle Australian shepherd. Dogs of this and other collie-like breeds have a genetic mutation leading to poor tolerance of certain drugs which, in Gus’s case, are chemotherapy agents he desperately needs for the treatment of his lymphoma. For us to safely treat him with chemotherapy drugs, we tested his DNA to determine if he carried this mutation before choosing the drugs in his treatment protocol. Fortunately for Gus, his DNA is just fine and he can be treated with our standard multidrug regimen. Additionally, affected dogs are also sensitive to common heartworm preventatives and diarrhea medications.

The mutation weakens the robust normal red blood cells and causes them to rupture inside the blood stream. When this occurs, the affected cat becomes lethargic and sometimes is jaundiced. Genetic testing did not find the mutation in Aby-Doux. Further investigation found his anemia was due to blood loss from an intestinal tumor which was then surgically removed.­

Does your dog’s breed have a predisposition to a genetic disease? The Orthopedic Foundation for Animals has a listing by breed.

Are you an international reader? Find a listing of genetic testing laboratories worldwide on the University of Pennsylvania Medical Genetics website.

This entry was posted on Monday, February 4th, 2013 at 8:00 am and is filed under dogs, pet health, pets, veterinarian. You can follow any responses to this entry through the RSS 2.0 feed. You can leave a response, or trackback from your own site.