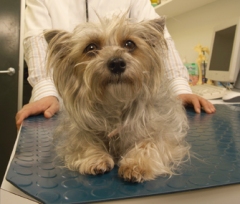 Dexter, a new dachshund patient of mine, was in last week for another round of puppy shots. He will soon be six months old and it was time for me to discuss the next step in his preventive health care plan: neutering.

The American Veterinary Medical Association has developed guidelines for responsible pet ownership. One of the guidelines obligates pet owners to control their pet’s reproduction through spaying and neutering; subsequently helping to control pet overpopulation in their community. Neutering is the common term for castration of a male dog or cat and spaying refers to removal of the ovaries and uterus, or in some cases just the uterus, of a female pet.

Surgical removal of the testicles is the current standard of care in both dogs and cats. This surgery renders a male dog or cat unable to reproduce and also removes the major source of the male hormone, testosterone. Removing the source of testosterone eliminates mating behavior in males and also plays a role in eliminating other unwanted dog behaviors. In both the dog and cat, neutering involves a small skin incision through which the testicles are removed. Cats typically go home the same day, but dogs may stay overnight to recover from anesthesia and for incisional monitoring.

Dexter’s owners were concerned about the surgery. They asked if he could just have a vasectomy instead of the traditional neutering surgery. Because my job is to make the best medical recommendations for the specific health concerns of each of my patients, I recommended the traditional surgery for Dexter. It provides him with the greatest number of health benefits. The surgery prevents unwanted litters of puppies and also prevents prostatic disease, testosterone-induced tumors and behaviors linked to testosterone production.

This entry was posted on Wednesday, January 23rd, 2013 at 12:52 pm and is filed under cat, dogs, pet health, pets, veterinarian. You can follow any responses to this entry through the RSS 2.0 feed. You can leave a response, or trackback from your own site.