Animals Were Affected by the Hurricane Too 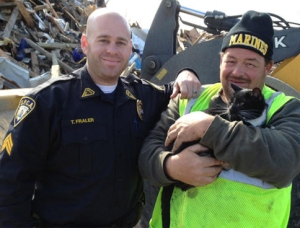 Hurricane Sandy created hardships for people living up and down the East Coast. Residents were displaced from their homes and sent to evacuation shelters or lived in flooded apartments, and life in general was disrupted. Sandy spared few. Animals, too, suffered as a result of the high winds and flood waters inflicted by the storm. The concept of zoobiquity springs from the fact that animals and humans share many of the same diseases. In the aftermath of Hurricane Sandy, I would argue we share much, much more.

The ponies of Chincoteague Island have always held a special allure for me, and after visiting this barrier island last summer, I was concerned for the ponies’ safety as the storm surge rose. Before the storm, the pony caretakers opened the gates on the fences around the pony habitat, allowing the ponies to go to higher ground and have free range of the entire island. All the ponies safely weathered the storm, as you can see on this video of their hurricane experience.

The New York Aquarium sits right on the famous boardwalk of Coney Island and is at the epicenter of New York City hurricane damage. Although the aquarium was without power for several days, generators ran filters and staff members pumped oxygen into tanks, keeping the fish, invertebrates, and mammals well cared for in their watery homes.

One of the newest aquarium residents, Mitik, an orphan baby walrus, seemed to enjoy the storm, not unlike many other New York City youngsters who rejoiced when school was cancelled for a full week.

Aquarium residents were not evacuated from their home, but many New York City pets were. All New York City evacuation shelters accepted pets and Mayor Bloomberg encouraged residents to take their pets with them as they evacuated. The New York Veterinary Emergency Response Team has monitored the census of pets in evacuation shelters in the New York area. As of Veteran’s Day, 141 pets still remained in the city’s shelters.

Other animal displacements were a pair of brown pelicans. Brown pelicans are normally southern birds and are neighbors of the Chincoteague ponies. Wildlife rehabilitators reported two displaced brown pelicans blown off course by Hurricane Sandy and found in Rhode Island.

This time of year, Rhode Island is much colder than the birds’ normal southern habitat and these fellows are currently resting and recovering from their harrowing hurricane experience while awaiting transport home.

Despite the upset and havoc Hurricane Sandy caused, there are happy stories too. Neighbors helping neighbors, runners of the cancelled New York City Marathon helping in relief efforts and families reunited. Patches the cat was rescued from the rubble of his home by a dump truck operator and Sandy the dog is back with his family.

My fellow animal lover, Jill Rappaport of NBC News, made this touching video about pet families and the hurricane.

What you can do

Microchips are a large part of the reason why happy post-hurricane stories can be told. If your pet is not microchipped, don’t wait until the next big storm. Now it the best time to get one.

The Animal Medical Center’s friend, Amy Sacks at The Daily News, has posted great information about how you can help pets affected by Hurricane Sandy.

Do you know anyone who had their lives or those of their pets disrupted by the storm? Share your stories in the comments below.

This entry was posted on Friday, November 16th, 2012 at 1:08 pm and is filed under avian, bird, cat, dogs, exotic, exotic pets, ferret, lizard, pet health, pets, rabbit, reptile, veterinarian. You can follow any responses to this entry through the RSS 2.0 feed. You can leave a response, or trackback from your own site.