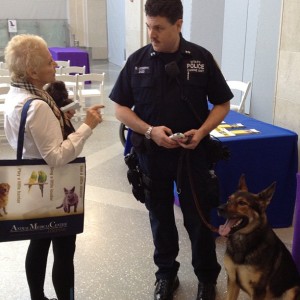 Working dogs with their human companions

Recently, some of my colleagues from The Animal Medical Center and I participated in the second annual Working Dog Expo at Morgan Stanley Children’s Hospital in upper Manhattan. This unique event, sponsored by Angel On A Leash, brings working dogs into the children’s hospital for demonstrations and petting by hospitalized children, their parents, and other members of the hospital community. Children well enough to come into a public area attended in person and about 150 other children, unable to move about, watched the demonstrations on closed circuit TV in their rooms. Fifth graders from a neighborhood public school also attended.

The children’s favorite demonstration was given by two police dogs. These high-energy officer dogs identified a backpack containing contraband and were rewarded with a good game of tug of war with their human partner. The human police officers brought a table full of protective gear, including a helmet and a 35-pound bulletproof vest, which proved to be a big hit with the children.

Although the dogs at the Expo were child-friendly and accustomed to working in crowds, my job at the Expo was to teach children safe and respectful behavior around dogs. Young children are the most common dog bite injury victims, and using guidelines from the American Academy of Pediatrics and some entertaining pictures, I walked the children through the steps of a safe dog interaction. Later the children practiced with dogs from Canine Companions for Independence, Angel On A Leash, and Guiding Eyes for the Blind.

Two puppy raisers for Guiding Eyes for the Blind brought their puppies-in-training. For the first eighteen months of their lives, guide dogs live with a puppy raiser and learn basic commands, housebreaking, and proper behavior in the home. One of the puppy raisers was a 12-year-old boy who was raising his third guide dog puppy. He told the children in attendance, many of whom were no older than he was, of his experiences while taking his dog into stores and other public places as part of training. Because he was so young, shopkeepers did not always believe he was a puppy raiser and he frequently was prevented from entering with his dog.

I was touched by a pair of heartwarming conversations about two working dogs who are patients of The AMC. The first conversation was with an owner of a one-eyed therapy dog. This dog visits sick children in the hospital every week. Several years ago, he lost an eye from an injury. His human therapy partner came to thank The AMC for offering free eye examinations to service dogs as part of a program sponsored by the American College of Veterinary Ophthalmology.

Since this dog has only one eye, she is especially grateful we participate in this program promoting healthy eyes. The other visitor came to thank The AMC on behalf of his sister, who is blind and uses a guide eye dog to navigate her way around New York City. This gentleman relayed the story of bringing his sister and her critically ill dog to us. He was grateful for our Frank V.D. Lloyd Fund for Guide Dogs, which for nearly 50 years has paid for the care of working guide dogs and helped save his sister’s dog.

Do you have a good working dog story? Share it on this working dog website or in the comments below.

This entry was posted on Monday, October 8th, 2012 at 8:52 am and is filed under dogs, pet health, pets, veterinarian. You can follow any responses to this entry through the RSS 2.0 feed. You can leave a response, or trackback from your own site.