Blueberry, a 2 year old fawn and white Chihuahua, was rushed to The Animal Medical Center one night after having what his family thought might be a seizure. When he arrived at The AMC and was under observation by the ER staff, Blueberry had another terrible episode of pain which appeared to be originating from his neck. The astute observation of excruciating neck pain coupled with weakness in all four legs helped the ER staff to formulate a short list of possible diagnoses for further investigation.

Drs. John McCue and Joshua Gehrke and The AMC’s Neurology Service consulted on Blueberry’s case and confirmed the list of possible diagnoses: a disk extrusion in the neck pressing on the spinal cord, cranial occipital malformation syndrome or an atlantoaxial luxation. Later that same day, under general anesthesia, an MRI was performed to determine the diagnosis.

Using The AMC’s 1.5 Tesla MRI, the strongest magnet in use for veterinary patients in the New York Metropolitan area, The AMC’s radiologist confirmed one of the potential diagnoses, atlantoaxial luxation, a common condition of toy breed dogs. In addition, The AMC radiologist also noted that Blueberry’s spinal cord had kinked, resulting in a hemorrhage in the spinal cord.

Immediately, Blueberry was wrapped in a stabilizing neck splint and prescribed cage rest until surgery could be performed. The AMC neurology service was unsatisfied with the standard techniques often used to repair the alignment of the first and second neck bones. Current techniques were fraught with potential complications and Blueberry’s small size made many of these risky. A dorsal (top) stabilization was considered the best approach. Stabilizing the bones from the top requires a wire be passed over the spinal cord and anchored into the spinous process of the second cervical bone; sounds tricky and it is. 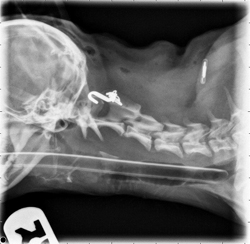 For Blueberry, the Neurology Service recommended a state of the art repair technique using the Kishigami atlantoaxial tension band. The technique was developed 25 years ago by a Japanese veterinarian, but the procedure was not widely utilized. In 2010, a group of French veterinarians published the results of using the Kishigami technique in eight toy breed dogs and The AMC Neurology team was anxious to use this improved procedure in a dog with an atlantoaxial luxation. To repair Blueberry’s neck, the special device had to be purchased and shipped from Spain since a Spanish company currently is the only manufacturer of this device. Due to difficulties in purchase and transport of the Kishigami device, Blueberry waited one month after his diagnosis for surgery wrapped in a neck stabilizing bandage resembling a cocoon to prevent further damage to his brain stem.

At his three month post-operative check, Blueberry was given a clean bill of health by Dr. McCue. “Blueberry is completely back to normal.” Dr. McCue told me. “Even better, the Kishigami device holds Blueberry’s first and second cervical vertebra in perfect stable alignment and he should continue to do well on a long term basis.” Based on the success Blueberry enjoys with his Kishigami device, a box of the devices are sterilized and ready to go so no dog will have to wait for this repair again.

Blueberry will be honored as an AMC Living Legend at the Fourth Annual Living Legends Luncheon on May 9th. Blueberry’s is being recognized for his patience during a month long hospitalization and for his pioneering spirit in being the first AMC patient treated with the Kishigami technique.

This entry was posted on Thursday, April 12th, 2012 at 9:00 am and is filed under dogs, pet health, pets, veterinarian. You can follow any responses to this entry through the RSS 2.0 feed. You can leave a response, or trackback from your own site.