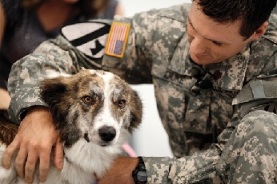 The Wall Street Journal recently published an essay that caught my eye. It is an excerpt from the new book Soldier Dogs by Maria Goodavage. Touted as a tour of military working dogs’ extraordinary training, heroic accomplishments, and the lasting impact they have on those who work with them, the book will be released March 15, 2012.

For those of us who love and admire dogs, the extraordinary feats of military dogs are not surprising. What I found charming, touching, and extraordinary were the comments by the readers of the essay. The comments are aimed directly at the heart of what makes dogs great and clearly come from dog lovers. I have included three of my favorites.

War is different, dogs are not

One reader comments, “War has changed, but the human-canine bond has not. I have no doubt that today’s dogs do as much to support our soldiers’ morale and help them withstand the stress and horrors of war as those faithful dogs of long ago did for the Civil War soldiers they accompanied.”

The American Civil War is the only war fought entirely on American soil. There were over one million casualties, many of them from disease. Compare the Civil War to our current wars being fought far from home. The casualties are fewer, but no less wrenching for the bereaved families. Military dogs continue to play an important role for our soldiers. In addition to the military dogs, there are the family dogs that wait patiently at home. These dogs, shown in this video with nearly a quarter million hits, are jubilant when their solider comes home.

According to the American Kennel Club, the gentle, intelligent and family friendly Labrador Retriever continues to be the most popular dog in America. This reader understands how irresistible these lovable dogs are:

“That [having Labrador Retrievers trained to identify improvised explosive devices would appear to be a smart move, since a major facet of the counterinsurgency mission is to win the hearts and minds of the indigenous population. One can surmise that a Labrador Retriever accompanying combat troops conveys a…peaceful image.” What better ambassador for America and what better companion for our soldiers than American’s number one dog?

We love them even if they shed

Labrador Retrievers are notorious shedders; so much so that I have written about Labrador hair previously. The third comment comes from someone who is clearly a Lab aficionado. “Expect lots of hair in the MREs [Meals Ready to Eat]. My lab passed away this August, but I am still finding his hairs everywhere in the house.” I can tell from this comment, the author’s Labrador will always hold a special place in his heart. Soldier dogs are special, but what dog isn’t?

Soldier dogs can find explosives, function as a sentry, or take down an enemy soldier. For this we praise their courage and cunning. But the commenters on Maria Goodavedge’s essay see more in dogs than their clever minds. They see the heart and soul of the beast, the part we love and cherish most.

Photo: Sergeant Christopher Duke and his Afghan dog, Rufus, reunited back in the USA. Rufus was honored by The Animal Medical Center in 2010 for saving 50 American soldiers from a suicide bomber in Afghanistan. Photo by Josh D. Weiss

This may also be found in the Tales from the Pet Clinic blog on WebMD.com.

This entry was posted on Thursday, March 15th, 2012 at 1:40 pm and is filed under dogs, obama, pet health, pets, veterinarian. You can follow any responses to this entry through the RSS 2.0 feed. You can leave a response, or trackback from your own site.

One Response to Soldier Dogs