Many New Yorkers believe the best play currently on Broadway is War Horse, adapted from the children’s story of the same name.

The War Horse is named Joey and inspired the name of the patient whose miraculous story I tell below.

At 10 weeks of age and weighing only one scrawny pound, Joey was admitted to the AMC. She was all personality. When her cage door was opened, she would launch herself onto your shoulder and purr in your ear. But even at her tender age, she had already been through a medical war of sorts, hence her name.

Joey’s medical war started just before she was ready to go to her new family, when everything she was eating started coming back up through her nose and mouth. Even if food and water were given with an eyedropper, 15 drops were too much.

Because of her age, her AMC team considered a rare congenital problem where an aberrant blood vessel tightens around the esophagus and blocks the passage of food. To diagnose this rare condition, Joey was anesthetized for CT scanning. Three nurses hovered around this tiny kitten to ensure proper anesthetic monitoring. Fortunately the CT scan showed Joey did not have this condition and her internal medicine team was relieved since treatment for this condition requires immediate thoracic surgery. But, the CT scan showed a narrowing of the esophagus due to the presence of some abnormal looking tissue.

The second part of Joey’s medical battle involved using the bronchoscope to view the inside of her esophagus. This is the same piece of equipment used to remove the pen cap from Barclay’s trachea.

Normally we would not use the bronchoscope to look at an esophagus, but Joey was too tiny for the usual scope. Dr. Douglas Palma, Small Animal Internal Medicine specialist at the AMC, found a polyp of the esophagus was the cause of the narrowing. The esophagus had shrunken down to barely a pinhole and also had an out-pouching called a diverticulum. 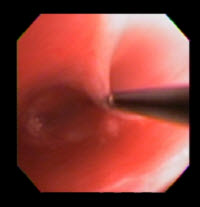 The photo at right shows a thin wire passed through the esophagus on the right and the diverticulum on the left.

The next part of Joey’s war involved placing a feeding tube past the narrowing and into the stomach to allow the esophagus to rest and to allow Joey to get food and water.

The AMC veterinarians thought they had won the battle, but a couple of weeks after the feeding tube was removed, food started coming up through Joey’s nose again. This time the diagnosis was an abscess in the area of the previous diverticulum. Very strong antibiotics were required, and after an initial course in the hospital, Joey’s family continued the antibiotic injections at home.

Joey sleeping on fleece in ICU the day after her multiple procedures. Red arrows point to the feeding tube wrapped into her neck with a blue and white bandage.

Today, thanks to the dedication of her family and the skill of her AMC Internal Medicine team, Joey is no longer the scrawny kitten seen in these photographs. She still has not quite completed treatment and needs her esophagus stretched to allow food to pass more easily into the stomach, but she is well on her way to good health. Throughout this entire ordeal, Joey has been sweet, loving and as her family says, “a piece of work.” The AMC is happy to have contributed to this work in progress.

This may also be found in the “Tales from the Pet Clinic” blog on WebMD.com.

This entry was posted on Friday, September 30th, 2011 at 4:10 pm and is filed under cat, pet health, pets, veterinarian. You can follow any responses to this entry through the RSS 2.0 feed. You can leave a response, or trackback from your own site.

3 Responses to The War Horse Kitten