What Was Best about Best in Show?

Last night was the grand finale of the 135th Annual Westminster Kennel Club Dog Show. By all measures, the event was grand. The purple and gold Empire State building illuminated New York City while 179 breeds were whittled down to a single, Best in Show dog. The Animal Medical Center team worked hard in our booth and in the Westminster booth rolling and packing signed posters purchased in support of the AMC’s Postgraduate Education Programs. 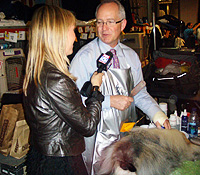 The successful WKC Show struck me as being different than in previous years. The media presence was huge — note the photo of Malachy the Pekingese being interviewed by Fox News.

The group winners were not breeds seen every day on the streets of New York, and haven’t been big winners at past WKC Shows. The size variation between the Best in Show competitors could not have been greater. Even the judge was unique — the first Italian to ever judge WKC Best in Show.

The dogs showing at the WKC Show are divided into seven groups and the seven group winners move up to the Best in Show competition. Last night, the seven dogs — Scottish Deerhound, Shar Pei, Bearded Collie, Portuguese Water Dog, Black Cocker Spaniel, Smooth Coated Fox Terrier and Pekingese — represented less common breeds and infrequent winners. The Pekingese last won in 1960, the Black Cocker Spaniel in 1941 and the Smooth Coated Fox Terrier in 1910. The Scottish Deerhound has been shown at the WKC show since the very first show, but it has not previously won a Best in Show. 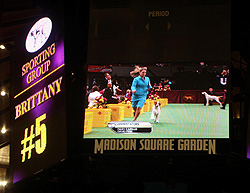 The Best in Show competition involves the dog version of a catwalk around the floor of Madison Square Garden. Keep in mind this floor accommodates a basketball court, a hockey rink and next week, Lady Gaga and her fans. No problem for the leggy Scottish Deerhound to waltz back and forth over the AstroTurf covering the floor. The same goes for the Smooth Coated Fox Terrier who moved like the Energizer Bunny; but the poor little Pekingese must have taken ten times as many steps as the Deerhound to complete his show ring trip due to his small stature.

From my vantage point, opposite the judging table, there was not a clear crowd favorite. Some years you can predict the winner based on the decibels of cheering from the audience. If that had been true, the Bearded Collie would have taken home the trophy. The person to my right whispered the Pekingese would be hard to beat and the person to my left was betting on the Shar Pei.

Even though the regal Scottish Deerhound, Hickory, took home the most prestigious prize in dogdom, the best part of Best in Show was that last night “Dogs Ruled.”

This blog may also be found in the “Tales from the Pet Clinic” blog from WebMD.

This entry was posted on Wednesday, February 16th, 2011 at 1:19 pm and is filed under dogs, pets, veterinarian, westminster dog show. You can follow any responses to this entry through the RSS 2.0 feed. You can leave a response, or trackback from your own site.